tl;dr - I created a Twitter bot that scrapes reported oil and gas spills in Colorado and tweets in near-real time. Check it out on Twitter and read more about it in the Rocky Mountain Collegian

It’s no secret that I’m a proponent of robot journalism. There are a whole class of issues in the world–those that stick around for longer than a few days and are largely driven by data–that machines are simply better at covering than humans in many regards.

Living in Colorado, the environmental consequences of energey exploration are a perennially relevant issue; we are one of the top oil producing states in the country with nearly 85,000 active wells. A consequence is that oil, gas, frack fluid and other drilling chemicals are spilled every single day.

Every few months I see an article pointing out that there thousands of spills a year. These articles are better written, more informative and more thought provoking than what a robot can do. Where they fail is in keeping the issue in the spotlight for the long run, in constantly reminding us that this is still happening.

But why should they? Thought and reflection are for humans; quantity and duration for machines.

There is a wealth of wonderful free (as in beer and speech!) open source tools available today that make this kind of thing easier than ever, and there is cheaper hardware than ever to run it on. The Raspberry Pi is absolutely ideal for projects like this–cheap, tiny and efficient. It draws lest than 2 watts and cost less than $50 all after some cabling and an enclosure (pictured below). That works out to just over $4/month for a year, comparable to a low-end web hosting plan. The newest model, the A+, is even cheaper.

To write it I used Python and Beautiful Soup to do the scraping. I store the data in a single table in an SQLite3 database and use the python-twitter library to Tweet. Check out the app scaffold on GitHub, clone it and build something cool.

I estimate that I spent about ten hours in total on this, and approximately four of that was spent building the actual plastic enclosure for the Raspberry Pi. 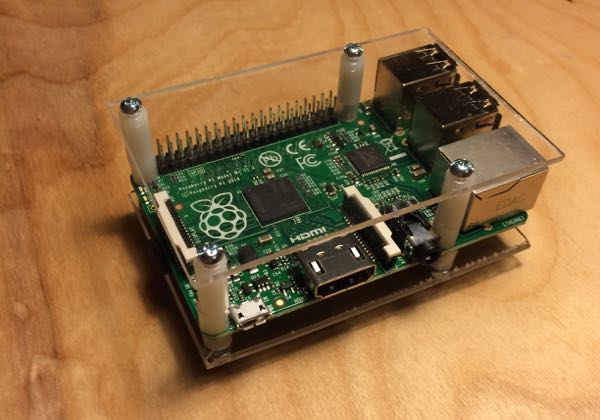 Raspberry Pi as a Tool for Journalism

The Raspberry Pi is an amazing tool for journalism. Either as a quick way to prototype ideas or as, in my case, a permanent solution for running things like this, the price and power efficiency is second to none. An average server might use in the hundreds of watts of power or more–a Raspberry Pi B+ only uses about 2w, often less. This puts it on par with a dim nightlight, energy wise.

What’s more, the accessibility of the hardware makes it ideal for a huge variety uses–sensors monitoring weather or other environmental factors, traffic, etc. They’re cheap enough to practically be treated as disposable and have a vibrant community to help you get up and running.

But the best part is that because they’re so cheap and tiny, a journalist can quickly create a prototype at their desk, make it live, and leave it running as long as it needs to. No need for costly servers or AWS time and no need for a lot of support from management or IT departments.